Good Contents Are Everywhere, But Here, We Deliver The Best of The Best.Please Hold on!

Zeolites are natural aluminosilicates formed from volcanic eruptions. They are hydrophilic, meaning they will absorb water. The process is reversible, so they gain from and lose water to the environment.
Zeolites have a much different structure than clay minerals. Aluminium, silicon and oxygen are arranged in a regular, micro-porous framework of tetrahedral units. These pores and interconnected voids contain cations and water molecules, and together with the huge surface area make zeolites extremely effective ion and cation exchangers. Cations can be exchanged by ion exchange and water can be removed reversibly by application of heat.Below are some of the successful application areas of zeolites.
Water Treatment

Zeolites are used as a filter media for particulate removal. Additionally, they are used to remove nitrogen, certain organic hydrocarbons (chloramines), and toxic cations such as silver, mercury, nickel, chrome, cobalt, antimony, arsenic, etc. Typical applications would include swimming pools, municipal water systems, and waste water treatment plants. Impurities in water can be divided into several groups. According to physical state there exist insoluble, colloidal and dissolved impurities. Impurities are also classified as mineral, organic, bacteria and biological. Mineral impurities include sand, clay particles, slag and ore particles, salt, alkali and acid solutions. Organic impurities comprise plant and animal tissue residues, sewage etc. Domestic and industrial effluents are the main sources of bacterial and biological impurities. Pure water used for decontamination of effluents by dilution consumes three times the volume of water required for other needs. Recently the problem of prevention of effluent contamination by using recyclable processes has attracted great attention. Introduction of highly effective methods of effluent purification in industrial plants is one of the promising trends in this field. Specific requirements are placed on water used for domestic purposes in every country. New filters for the purification of drinking water and industrial effluents are very important. Practically, water containing suspended particles is purified by percolation through quartz sand of 0.5-2 mm grain size. Quartz sand is however rather expensive and has a low fine-trapping capacity. Studies have shown that quartz sand can be successfully replaced by natural zeolites, which are superior in several ways. The advantages of using clinoptilolite based zeolite filter instead on quartz in physical filtration systems are:The high internal and external surface area of clinoptilolite exceeds that of quartz by more than 10 times Zeolite pore space permeability for water transmission through the grains or fragments is 100% compared to non-permeable quartz grains. The amount or layer thickness of zeolite in the filtration systems can be much thinner (smaller volume) than quartz sand systems – because of the high surface area and pore The density of zeolite is about half of quartz grains thus the volume of one ton of zeolite is twice that of quartz sand. Zeolites also convert calcium and magnesium salts into sodium salts which do not cause hardness. This process uses zeolites which act as a medium for the exchange of the metal ion : Calcium sulfate + sodium zeolite -> calcium zeolite + sodium sulfate The water is usually passed through a bed of the zeolites, which may be a processed sand or synthetic material. The zeolite is then regenerated by passing brine through the bed. 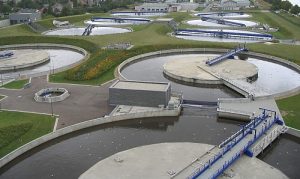 Wastewater Treatment
Clinoptilolite is a wastewater treatment agent. Since Clinoptilolite is highly selective for ammonium ions, it is used the extraction of ammonia nitrogen from sewage and agricultural effluents. NH4 is toxic to fish and other forms of aquatic life.NH4+ also contributes greatly to the rapid growth of algae and leads to eutruphication of lakes and streams. Increasingly stringent regulations on the amount of nitrogen that is permissible in municipal and industrial wastewater effluents have been promulgated in recent years by local national environmental protection agencies.Desirable properties of Clinoptilolite for use in ion exchange columns include high ion exchange capacity and selectivity, rapid exchange rates, and high resistance to attention during backwash operations. Employing a Clinoptilolite ion exchange process, 99% of the contained ammonium ions are removed from tertiary sewage effluents. The trace amounts of heavy metals present in the wastewater are also extracted. The addition of Clinoptilolite to activated sludge aids oxidation and settling.
Animal Feed Additive
Zeolites can be given to animals it they are reduced in size enough so they will not give any harm to the animal. Researches show that addition of clinoptilolite to the diet on growth of animals under some conditions provides protecting against ammonia toxicity by binding ammonia and reducing cadmium induced anemia. Clinoptilolite has also the ability to absorb toxic cations like Pb, As, Cd and thereby prevents or reduces their adverse effects on metabolic functions in animals. In animal husbandry, Clinoptilolite based zeolite which is crushed and grinded, mixed with normal animal feed with a ratio up to 5%. So zeolite is not a feed material by itself but it is an additive and results in significant changes in many properties. By adding zeolite into fodder, animals gain weight, the conversion rate is decreased (less feed per pound of grain); diseases are reduced; bone growth improved; manure odor is reduced and the number of gradable eggs, value of milk, or meat indexing is increased. Also Clinoptilolite addition to fodder leads to better digestion, activation of certain organs and survival rate.At present no data is present for the effectiveness of Clinoptilolite over these improvements. However, zeolite becomes an ammonium reservoir that allows the animal to more efficiently utilize ingested nitrogen. Other explanations may include the myco – toxin binding ability of the zeolites or the fact that zeolite takes up heavy metals.In the year 1999, the European Union has authorized the use of clinoptilolites either of volcanic or sedimentary origin as a feed-additive in the group of binding and flowing agents.
Industrial Gas Treatment
Each year enormous amounts of ash and gases like sulfur dioxide and carbon monoxide are ejected into the atmosphere especially in the Northern Hemisphere due to industrial development. This results in an important problem for the environment. Also in some cases, emitted components interact with each other in air forming smog and acids. The basis of gas purification is to recover the valuable compounds in ejected gases and also to protect environment . Various gas purification systems involving adsorption become important at this point, since only adsorbents can cause complete trapping of impurities and the purification of certain components. Among many types of adsorbents, most suitable for unsaturated and polar compounds are zeolites. Clinoptilolite based zeolites are widely used to eliminate impurities. Today, natural gas is preferred for residential heating and industrial processes as it is a clean energy source. The separation of nitrogen from methane is therefore becoming increasingly important for natural gas recovery and enhanced oil recovery. Natural gases, which contain significant amounts of nitrogen, need to be upgraded in order to meet the pipeline quality for minimum heating value specifications. Despite the advantages of using adsorption for methane upgrading, this separation has been found particularly difficult because of the lack of a satisfactory adsorbent. Such an adsorbent needs to have high nitrogen/methane selectivity. For this application clinoptilolites can be chosen. The experiments done to clinoptilolites (140 mesh) show that clinoptilolites have a potential for nitrogen/methane separation and with some improvements they can replace the commercial adsorbents used today. Other important application area of zeolites in gas purification is the elimination of sulfur dioxide. Nonferrous metallurgical plants using low grade coal and liquid fuel are the main sources of environmental pollution with sulfur dioxide. Another important point of sulfur dioxide recovery is the usage of this valuable raw material for the production of sulfuric acid, elemental sulfur and ammonium sulfate.There are two types of solid adsorbents commonly used in controlling SO2 emissions: one is non-regenerative. The common examples are CaO and MgO obtained from different sources such as hydroxide, carbonate and acetates. The other is regenerative, such as zeolites, silica gel, and charcoal. The major advantage of using zeolites is their ability for successive regeneration. The reaction temperature is also relatively lower. In this application, advantages of zeolites are also based on their adsorption characteristics rather than their molecular sieving actions.